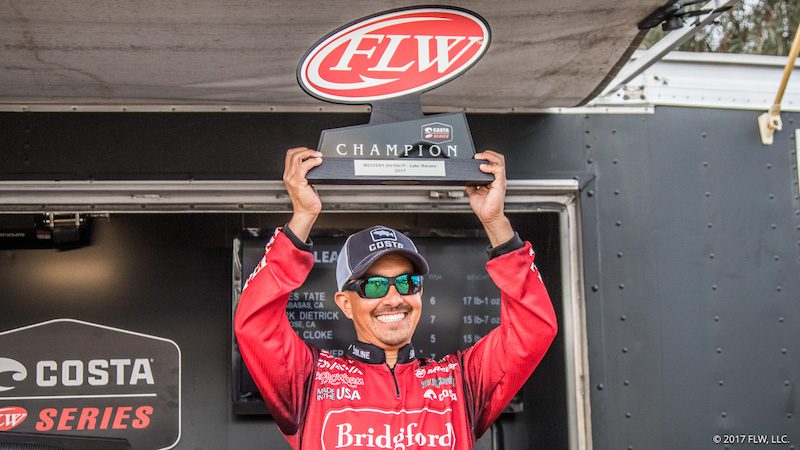 “The feeling is very surreal right now,” said Uribe, who also won the FLW Series event on Lake Havasu when the Series last visited the fishery in 2015. “I only fish FLW events out west, and couldn’t do it at this level without the support of my sponsors. I’m truly blessed.”

Uribe said he primarily spent his mornings targeting largemouth bass in Windsor Basin and his afternoons targeting smallmouth near rock piles. He said he caught all of his largemouth bass this week on a custom 7-inch swimbait, the same lure he used to win the event in 2015.

“I focused on shallow bays littered with tules and caught three largemouth on Day One,” said Uribe. “When the sun came out, I headed out to deep rock piles looking for smallmouth. I used a “Ned rig”. It was a 3/16-ounce mushroom-head jig with a 7-inch Watermelon Laminate-colored Yamamoto Senko, cut down to 3 inches. I caught two smallmouth on it, including a 3- and a 4-pounder. Of the seven total bites I had that day, those two were my key fish.”

Uribe said he followed a similar pattern on Friday.

“I started out throwing the swimbait in the same shallow tules and got some bites,” said Uribe. “Around noon, I went back out to the rock piles with the Ned rig and caught a 3-pound smallmouth. On Friday, I found that the bass were really moving shallow, so on Saturday, I knew I’d be staying up near the bank.”

Uribe said he finished the tournament in Windsor Basin, using the swimbait to put together his limit.

“I fished every shallow pocket with tules and stained water that I could find,” said Uribe. “I fished slow and methodically, and caught 10 largemouth. I never lost a fish all week, which was huge for me.”

The top 10 pros on Lake Havasu were:

Bink Desaro of Meridian, Idaho, caught a 7-pound, 3-ounce bass Friday – the biggest of the tournament in the Pro Division. For his catch, Desaro earned the day’s Boater Big Bass award of $248.

Andrew Levy of Grover Beach, California, won the Co-angler Division and $27,000, including a Ranger Z175 with a 90-horsepower Evinrude outboard motor. Levy earned his win with a three-day total catch of six bass weighing 21 pounds, 15 ounces.

The top 10 co-anglers on Lake Havasu were:

Justin Bolen of Paradise, California, caught the biggest bass of the tournament in the Co-angler Division Friday, a fish weighing 8 pounds, 7 ounces that earned him the day’s Co-angler Big Bass award of $165.