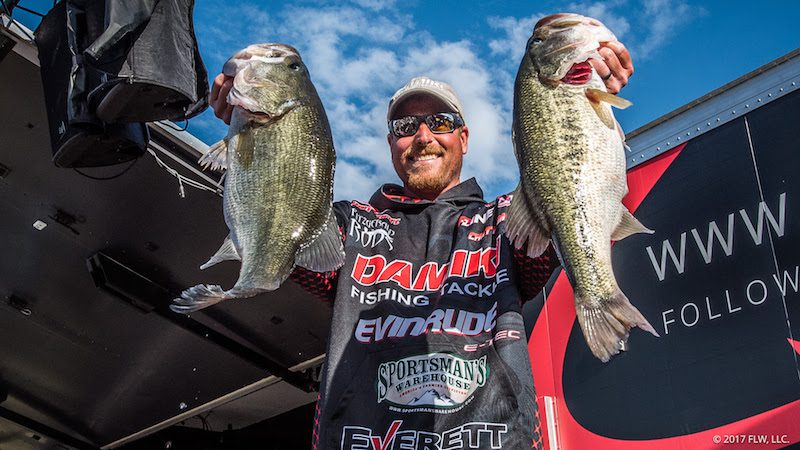 JONESTOWN, Texas (Feb. 16, 2017) – Pro Bryan Thrift of Shelby, North Carolina, brought a five-bass limit weighing 24 pounds, 12 ounces to the scale Thursday to take the early lead at the FLW Tour at Lake Travis presented by Quaker State. Thrift will bring a 4-pound, 7-ounce lead into day two of the four-day event that features 164 of the top bass-fishing anglers in the world competing for a top cash award of up to $125,000.

“I’m at a complete loss for words right now,” said Thrift, who has amassed nearly $2 million in FLW competition. “In three days of practice I couldn’t catch a third of the weight that I caught today. Each fish was truly a gift from God.”

Thrift said he spent the majority of his day working through an area with a 6½-inch Watermelon Candy-colored Damiki Finesse Miki worm rigged on a shaky-head jig.

“It was a big area, probably 2 to 3 acres long,” said Thrift. “There were some bushes, rocks and points. I caught four fish there, including a 6-pounder. I picked it apart for nearly five hours. There were some other boats nearby, so I didn’t want to leave. I wanted to catch as many bass as I possibly could.”

After 2:30 p.m., Thrift said he made a couple more stops and capped off his limit with another 6-pounder.

“I caught it on a jig in an area that I went to on a whim,” said Thrift. “It was mind-blowing.”

The top 10 pros after day one on Lake Travis are:

Joseph Webster of Fulton, Mississippi, earned the day’s $500 Big Bass award in the Pro Division thanks to a 7-pound, 14-ounce largemouth.

The top 10 co-anglers after day one on Lake Travis are:

Larson also earned $250 for the Big Bass award in the Co-Angler Division with an 8-pound, 5-ounce largemouth.

In FLW Tour competition, pros and co-anglers are randomly paired each day, with pros supplying the boat, controlling boat movement and competing against other pros. Co-anglers fish from the back deck against other co-anglers. The full field of 330 anglers competes in the two-day opening round. Co-angler competition concludes following Friday’s weigh-in, while the top 20 pros based on their two-day accumulated weight advance to Saturday. Only the top 10 pros continue competition Sunday, with the winner determined by the heaviest accumulated weight from the four days of competition.

The total purse for the FLW Tour at Lake Travis presented by Quaker State is more than $800,000, including $10,000 through 50th place in the Pro Division.

Prior to the weigh-ins Saturday and Sunday, FLW will host a free Family Fishing Expo at Jones Brothers Park from noon to 4 p.m. The Expo is a chance for fishing fans to meet their favorite anglers, enjoy interactive games, activities and giveaways provided by FLW sponsors, and learn more about the sport of fishing and other outdoor activities.

Also for youth, the FLW Foundation’s Unified Fishing Derby will be held at Jones Brothers Park on Saturday, Feb. 18 from 9-11 a.m. The event is hosted by FLW Foundation pro Cody Kelley along with other FLW Tour anglers, and is free and open to area youth 15 years of age and younger and Special Olympics athletes. Rods and reels are available for use, but youth are encouraged to bring their own if they own one.

The FLW Tour at Lake Travis is hosted by the City of Jonestown and the Austin Sports Commission.