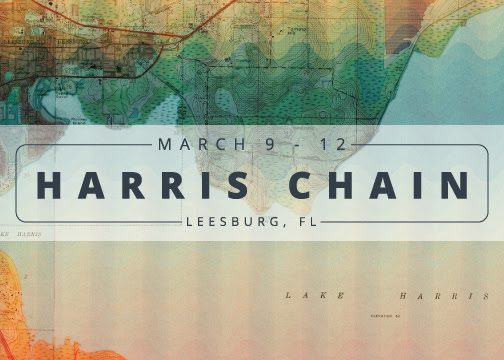 LEESBURG, Fla. (Feb. 23, 2017) – The third tournament of the 22nd season of the FLW Tour, the most competitive Tour in professional bass-fishing, kicks off March 9-12 with the FLW Tour at the Harris Chain of Lakes presented by Ranger Boats. Hosted by Lake County, Florida, the tournament will feature 330 of the world’s best bass-fishing professionals and co-anglers casting for top awards of up to $125,000 cash in the pro division and up to $25,000 cash in the co-angler division.

“We’re going to see anglers catching them a lot of different ways in this tournament,” said local pro Tim Frederick of Leesburg, who is fishing his second season as a professional on the FLW Tour. “There will be a little bit of people offshore in the grass, then you’re going to see people combing through the canals trying to find any more spawning fish. The marshes are going to come into play – there are a lot of shallow spawning areas that you can’t necessarily see them spawning, but they’re in there.

“I do think that the majority of the bass, about 90-percent, will be postspawn,” Frederick continued. “So, I think moving and reaction baits are going to be hot. As warm as the weather has been, recently, I believe topwater baits could come into play as well.”

Frederick said that the FLW Tour anglers should be fairly spread out amongst the 10 lakes and the canals on the Harris Chain that will be in play.

“Where a guy chooses to fish is going to be a big factor,” Frederick said. “I think we’ll see anglers who have a tough practice decide to stay in Big Lake Harris and Little Lake Harris, just to maximize their fishing time. Then, we’ll have a few guys that are the high-risk, high-reward type that make long runs to Lake Griffin, and up the river, and maybe even to Apopka.

“You’d have to be on them pretty good in practice to make those runs,” Frederick continued. “I think that the key is going to be not to spend too much time in any one spot. You’re going to have to run and gun – a fish or two here, then run around and find a few more.

“Everybody in the field will have reaction baits tied on – lipless crankbaits, squarebill crankbaits, ChatterBaits, spinnerbaits. I definitely think we’ll see a 10-pounder or two, and the potential for a 30-pound stringer is always possible on the Harris Chain. It’s going to be a fun tournament.”

Frederick went on to predict that the winner would weigh in a four-day total weight of 65 pounds.

Prior to the weigh-ins Saturday and Sunday, FLW will host a free Family Fishing Expo at the Venetian Gardens from noon to 4 p.m. each day. The Expo is a chance for fishing fans to meet their favorite anglers, enjoy interactive games, activities and giveaways provided by FLW sponsors, and learn more about the sport of fishing and other outdoor activities.

Also for youth, the FLW Foundation’s Unified Fishing Derby will be held at the Venetian Gardens on Saturday, March 11 from 9-11 a.m. The event is hosted by FLW Foundation pro Cody Kelley along with other FLW Tour anglers, and is free and open to area youth 15 years of age and younger and Special Olympics athletes. Rods and reels are available for use, but youth are encouraged to bring their own if they own one.

In FLW Tour competition, pros and co-anglers are randomly paired each day, with pros supplying the boat, controlling boat movement and competing against other pros. Co-anglers fish from the back deck against other co-anglers. The full field of 330 anglers competes in the two-day opening round. Co-angler competition concludes following Friday’s weigh-in, while the top 20 pros based on their two-day accumulated weight advance to Saturday. Only the top 10 pros continue competition Sunday, with the winner determined by the heaviest accumulated weight from the four days of competition.

The total purse for the FLW Tour at the Harris Chain of Lakes presented by Ranger Boats is more than $800,000, including $10,000 through 50th place in the Pro Division.

Television coverage of the FLW Tour at the Harris Chain of Lakes presented by Ranger Boats will premiere in high-definition (HD) on NBC Sports Network (NBCSN) May 3 from 12:30 p.m.-1:30 p.m. EDT. The Emmy-nominated “FLW” television show airs on NBCSN, the Pursuit Channel and the World Fishing Network and is broadcast to more than 564 million households worldwide, making it the most widely distributed weekly outdoors-sports television show in the world.