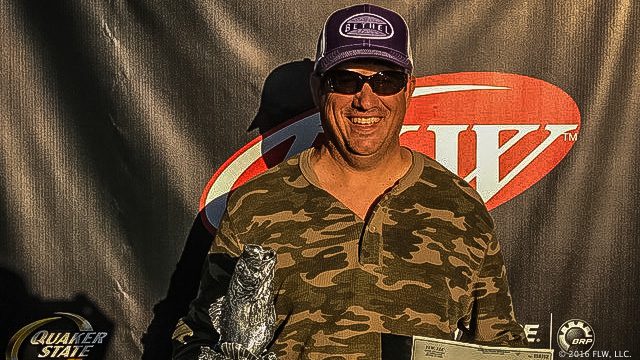 “The weather Saturday morning was cloudy and breezy, which told me the jig bite would be strong,” said Queen, who earned his second career win in BFL competition. “We’d had seven warm days in a row, so both largemouth and spotted bass were up shallow. I knew I’d be cruising the bank to catch them.”

Queen said his strategy was to cover as much water as he could. He said he used one lure to catch his limit – a 3/8-ounce Queen Tackle tungsten jig with a blue Zoom Super Chunk trailer.

“I fished mid-lake and hit anything that had wind blowing into it,” said Queen. “I caught one of my best bass on my third cast, and put one quality fish in the boat every hour from then on. I caught a lot of fish, but it took a while to boat the 3-pounders.”

Queen said the majority of his bass came from open stretches of bank in 3 to 8 feet of water, and one that he weighed in came from a dock.

“I made long casts – probably 35 to 40 yards,” said Queen. “The key was that I would take the jig and swim it fast. With its small head, trimmed skirt and large hook, I could really load it up and set it hard. I didn’t lose a single fish all day.”

Cannon caught a 5-pound, 15-ounce bass – the largest of the event – which earned him the day’s Boater Big Bass award of $605.

Kyle Richardt of Raleigh, North Carolina, caught the biggest bass of the tournament in the Co-angler Division, a fish weighing 3 pounds, 15 ounces, and earned the day’s Co-angler Big Bass award of $302.