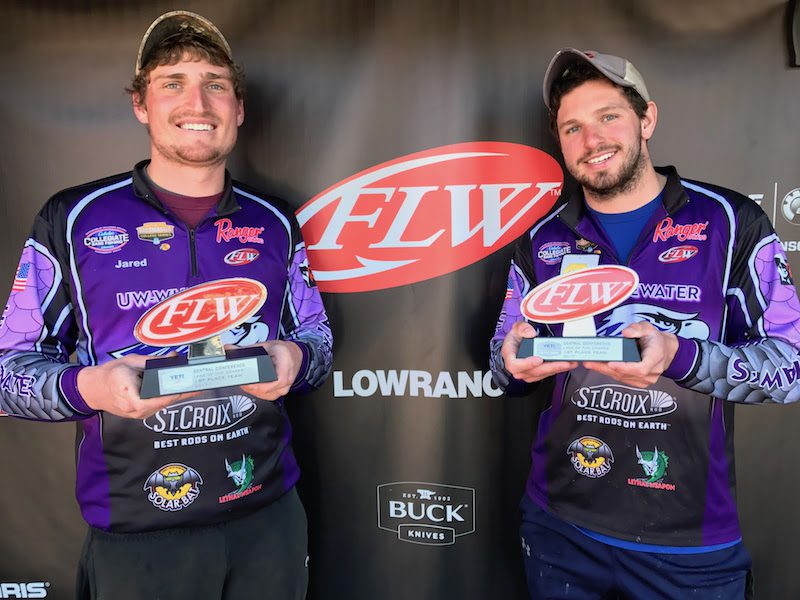 OSAGE BEACH, Mo. (April 3, 2017) – The University of Wisconsin-Whitewater duo of Jared Mataczynski of Wausau, Wisconsin, and Steve Nebel of Whitewater, Wisconsin, won the YETI FLW College Fishing Central Conference tournament on Lake of the Ozarks Saturday with a five-bass limit weighing 19 pounds, 5 ounces. The victory earned the Wisconsin-Whitewater bass club $2,000 and the team will now advance to compete at the 2018 FLW College Fishing National Championship.

“It’s awesome to finally get a win,” said Nebel, a senior majoring in business. “Jared and I have been fishing together all four years of our college career, but we haven’t had the right breaks that we needed to put it all together and get a win. We thought this tournament was going to be an umbrella rig slugfest, so we’re pretty excited to finally qualify for the FLW National Championship.”

“It was a crazy day,” said Mataczynski, a senior majoring in entrepreneurship. “Since we’re from Wisconsin, we don’t have much experience with fishing umbrella rigs. But, after doing our research before the tournament we knew that was going to be the deal.”

The duo said that they caught their winning limit by fishing what they called “channel swing bluff wall ends”, where the bluff wall ended as it narrowed into a cove. They said that they fished umbrella rigs all day, rigged with Keitech Swing Impact FAT swimbaits. They used 3.8-inch swimbaits on the outside and a 4.8-inch swimbait that they had dipped in chartreuse dye in the middle, to trigger the bites on that swimbait.

“We wanted the bass to hit that bait, because that was one that had one of the three hooks allowed in it,” Nebel said. “We dipped the tail in chartreuse to differentiate it from the others.

“The majority of our pattern was all new water,” Nebel continued. “We just ran the lake and fished different channel swing bluff walls. We ran probably 20 different spots and caught six keepers – about one an hour.”

“The key for us was just trying something different,” Mataczynski, went on to say. “A lot of the bluffs we were fishing did not have a ledge or a shelf, just a steep wall. We tried them anyways and managed to catch some good fish there.”